The first question we get when we tell people we are traveling for a year is – Where are you going?

Part of the journey is to not have too much of plan, which makes this question a bit tricky to answer… and really hard for my type A personality. But, we do have some general areas that we want to go to and have planned with these spots in mind. We are heading in an East direction around the world and we will have destinations planned out about 2 months in advance. 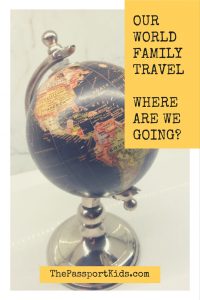 Here is what we have in mind:

We are hoping to explore 5 continents – Europe, Africa, Asia, Australia & South America. Another goal is to go all the way around the world! It will be interesting to look back in a year and see where the journey took us. We are open to new places and ideas.

Where would you go?