Here are 5 family travel blunders that we have experienced over the years. Let’s just get the realities of travelling with kids out there… it is never perfect. There are many moments when parents look at each other and think “Yep, that just happened!”. In the spirit of making all you other parents out there feel a little better about yourselves today, we are going to share a few of our blunders…. trust me there are more than 5!

#5 Flat Tires on our Stroller

Yep, as we checked the stroller into the oversized check-in at the airport the attendant informed us we should let out some of the air in the tires so they don’t burst with the cabin pressure. Ok, great… I didn’t know that, so we let the air out and maybe a bit too much. When we landed with all our luggage and went to put the kids in the stroller and it wasn’t going anywhere!!

The worst road side diaper change… ever. I will give myself a pat on the back for being able to do the quickest diaper changes anywhere. I have diaper changes in the car down to a science and I am really good at it… gold stars for me. This was until Sofia decided to test me on this. It was horrendous! The smell was so bad that we literally pulled over so quickly and proceeded to change her. Other family members travelling in separate cars behind us thought we had a flat tire on our truck and came to find out if we were ok and backed up immediately. All the doors wide open, airing out and I am almost throwing up off the side of the road. To top it off, no joke, it was the middle of winter and -40 degrees Celsius with the wind gusting. Luca is crying because his face is about to freeze off but the smell was so bad we just told him to be tough. The diaper was ditched the back of the truck, and when we got home all our luggage stunk and it was a frozen solid diaper full of crap that just wouldn’t leave us alone.

#3 The Yack of the Big Mac Attack

Yep, trying to save a bit of time we stopped by McDonalds for the family to eat in the car as we were heading out for a weekend adventure. All packed up, ready to go, everyone eating their special McDonalds treat and then… Luca proceeds to projectile and violently throw up all over himself, car seat, my seat in front of him and Sofia got splashed. Vomit was everywhere! We ended up driving to the car wash and cleaning out the entire vehicle and pressure washing his car seat. Poor sick little Luca standing out in the car wash parking lot in his underwear as we scrub the vehicle down.

We just finished driving 12 hours from our home to get to the mountains in the midst of a snow storm. We settled into our hotel and got Luca down and tucked ourselves in to get a good night sleep before a day snowboarding. Half-way through the night his fever kicks in and the beginning of the night from hell. No Tylenol and no thermometer… totally prepared parents! We try everything to get his temperature down and were almost at the point of taking him to the hospital. He finally settled and would only sleep in our arms. Next morning the alarm clock goes off, and we don’t move. We sat this below hotel room for 2 days until he felt better. We finally were able to get a partial snowboard day on the third day. We drove 24 hours for about 5 hours of snowboarding! We learned from this experience and now we pack the medicine cabinet. 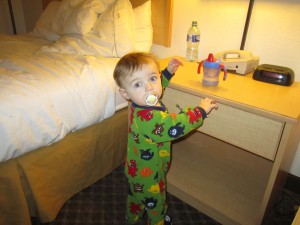 We were heading back to our hotel from downtown Puerto Vallarta, Mexico. We flagged down a taxi, 4 adults and 2 kids pile into the small little taxi. Sofia is on my lap, Luca is on Jamie’s lap and we are snug…. not the safest but it worked! The driver proceeded to drive like we were in a Nascar race. Now I tend to be okay with drivers in foreign countries… they are used to crazy traffic, but I get a cautious when my kids are with me. Jamie and I exchange looks at each other and you know when everyone is thinking it but nobody says it. Well, Luca speaks up “Slow Down“, the cab driver immediately looks at him, smiles and slows down. We all break out in laughter! 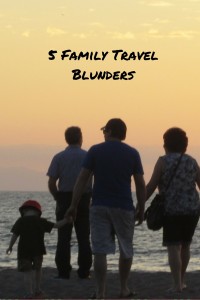 Things do not always go as planned, more often than not they never goes as planned. We have just learned to find the humour in the experiences, you can’t change them and they usually are out of your control. As parents, we have all been there and had those moments. It is not all perfect like the pictures, we just tend to be a little busy during those times to capture the moments. They also make the best stories!